Backup power during an outage maintains comfort while it keeps home and family safe, prevents business losses, and may allow a business to remain open during an extended outage. An Automatic Standby Generator, sometimes called a backup generator, is an automatic generator that provides backup power during an outage. They “stand by” waiting for a power outage. When it happens, the generators start automatically and switch the home or business to generator power. No human intervention necessary.

Standby Generators for homes and businesses fall into two main classes: air cooled and liquid cooled. The cooling refers to how the engine cools itself. Air Cooled Generators are the choice of many homeowners, but also fit the needs of some small businesses. Commercial Standby Generators offer the reliability and longevity required by operations from retail to farming.

A generator engine converts fuel to mechanical energy which turns an alternator to generate electricity.

Power capacity is determined by the alternator capability and engine size. As the power drawn from the alternator increases, the load on the engine also increases and it uses more fuel. Generator manufacturers provide ratings in running watts and starting watts. Running watts equals the maximum continuous capacity of the generator. Starting watts, also called Surge Watts, is the maximum power the generator can produce for a few seconds to start motors or power large inductive loads like transformers.

For example, the air-cooled Generac 7043 22 kW Generator has a rated capacity of 22,000 running watts. It can provide 22kW all day. The engine in the 7043 has the power to turn the alternator while the generator supplies the maximum rated load. It must also have the power to provide the high starting current when it starts a heavy load like an air conditioner motor. For a few seconds, the starting watts of a 5-ton air conditioner could be 20,000 watts or more.

If the home or business is already drawing 14,000 watts from the generator, starting a 5-ton air conditioner adds a momentary 20,000 watts to the load for one or two seconds as the motor starts. The air conditioner load then falls to 7000 watts.

What is an Air Cooled Generator?

Forced air cooling uses a fan to blow air over the generator engine to remove more heat. Manufacturers equip air cooled generator models with a one or two-cylinder engine less than one liter (1000cc) in size. The engine turns the cooling fan in addition to the alternator. It is efficient and suitable for moderate climates where temperatures rarely rise above 100° F.

However, in hot climates, an air cooled generator enclosed in a metal cabinet cools less efficiently during hot weather. Overheating can occur during extended use under a moderate to heavy load. The generator controller senses the engine temperature and if it exceeds the safety limit, the controller shuts the engine down to prevent damage. The generator won’t restart until the engine cools and may require the owner to intervene.

Not only does a liquid cooled generator engine turn the alternator, it must also pump the coolant and turn the fan. These functions require additional power from the engine.

The liquid cooled generator has two advantages over air-cooled models. Liquid cooling is more efficient. The coolant can still remove heat even at the extreme temperatures inside the engine. It is not unusual for engine coolant to exceed the boiling point of water. This efficiency allows the generator to operate in hot climates where temperatures often exceed 100 degrees and may climb much higher.

A liquid cooled generator can use a larger engine than an air cooled, which allows the generator to produce more power. The largest air-cooled standby available is 24kW, a big step ahead of 20kW competitors, but doesn’t compare to a 150kW generator for very large estates, agricultural operations, or businesses. 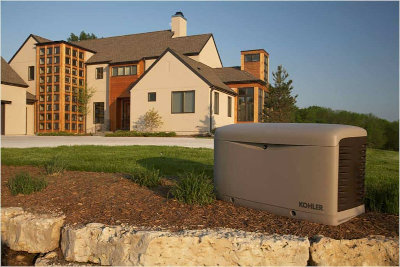 An air-cooled generator is less complex, usually has a smaller engine, and weighs much less than a comparable liquid-cooled system.  The smaller engine and lower overall capacity (in general) lower the purchase price. Easy to move with a cart. Two people can install the generator in one day. It sits directly on the soil or a concrete Generator Pad at additional cost. In either case, the installer levels the site and places the pad directly on the ground with the generator on top. Installation costs less and takes less time. Air-cooled generators typically use less fuel than liquid-cooled counterparts. Most air-cooled generators are certified for installation at 18 inches from the building.

Determine the Right Fuel for Your Standby Generator

The overall size, placement, and installation costs of liquid-cooled generators give the air-cooled an advantage. Some liquid-cooled models require five feet of clearance to the building. With a 50 percent larger footprint than air-cooled models, the larger generators use up valuable space in a backyard instead of fitting into the landscape. Distance from the building becomes additional landscaping repairs and higher costs for plumbing and electrical work.

Power requirements that exceed 20-24kW require a liquid cooled generator. Liquid-cooled power capacity starts at 15kW for Diesel and 22kW for natural gas or propane. Air-cooled generators start at 7.5kW and max out at *20-24kW.

Liquid Cooled Generators have a clear advantage in hot climates, especially the desert Southwest. When temperatures climb over 120 degrees, air-cooled generators won’t run long before they overheat and shutdown. This additional reliability makes them more suitable for business applications or critical systems that must run during a power outage.

*Generac is currently the only manufacturer that offers 22kW and 24kW air-cooled generators.

Both types of generators have their place. Air-cooled generators are fuel efficient and economically priced. They fit the average home in a moderate or cool climate where temperatures rarely rise over 100 degrees Fahrenheit. Businesses with power needs similar to a moderate to large home will also find the air-cooled models a good choice, especially where installation space is a consideration. Several air-cooled 3-phase generators are available from Generac or Briggs and Stratton. With few exceptions, 3-phase power is limited to business applications or large residential buildings.

Choose the Right Generator for Your Business

Larger homes and businesses that need more power or anyone in a hot desert climate should consider a liquid cooled generator. Superior cooling and power capacity that reaches far beyond the limits of air-cooled generators make the larger generators a natural choice for these applications.

Natural gas, diesel, and propane liquid-cooled generators provide fuel choices for anyone who needs backup power during an outage.

Guide to Choosing a Liquid Cooled or Air Cooled Generator